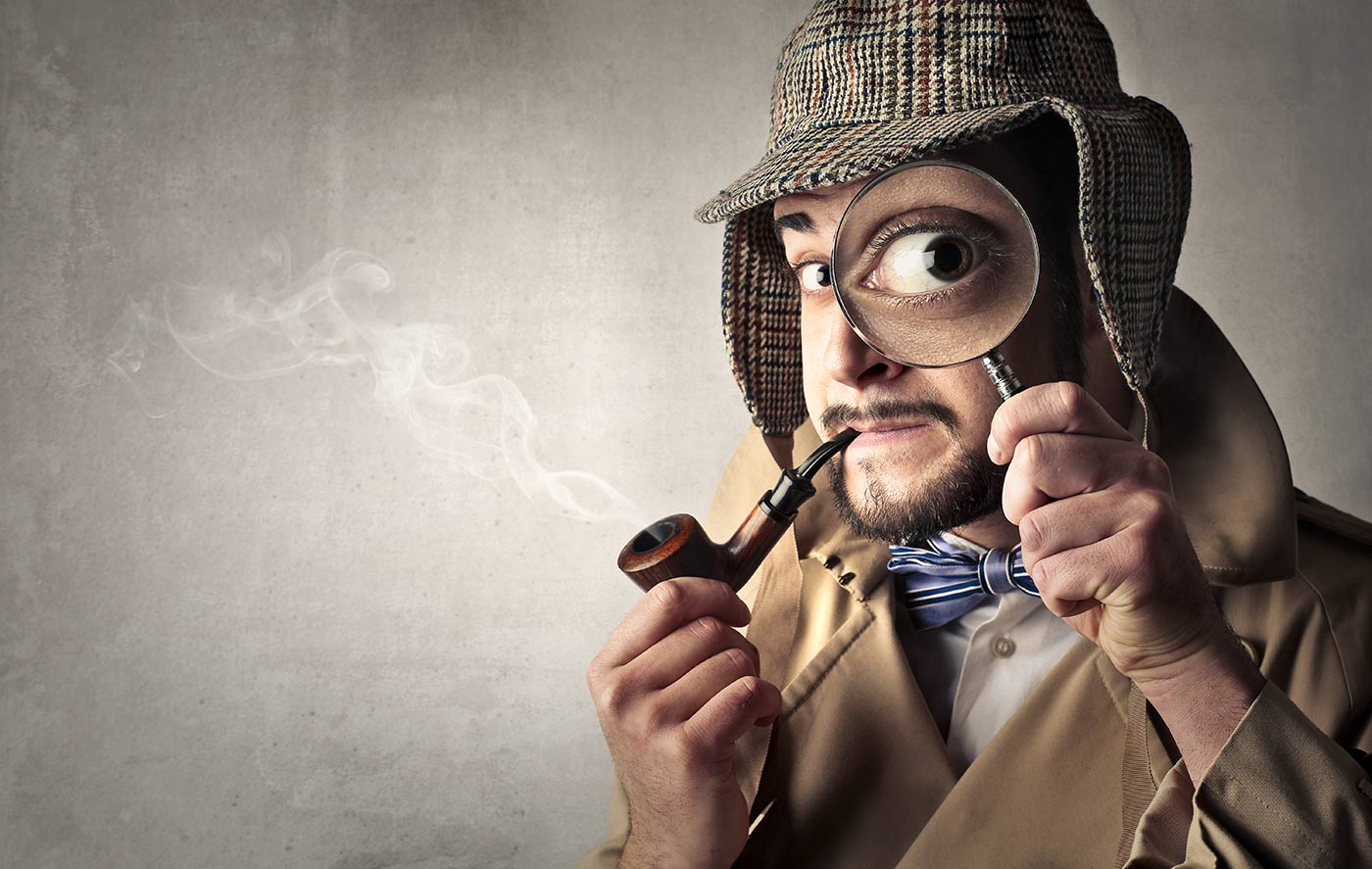 While account research will help you prioritize which accounts to target and what pain points to focus on, accounts don’t make decisions; people do. And in B2B sales, decisions aren’t made individually either. You’ve got to generate group consensus, which is the name of the game. The good news is that because there are multiple people with skin in the game here, there are multiple points of entry for the salesperson.

But what stakeholders should we start with and why? There are so many people in these accounts and it’s hard to figure out where to start. Should I go top down or bottom up or both? It all starts with identifying which functional roles, not always titles, your solution will impact.

What’s the difference between a functional role and a job title?

A title is, just that, a label your company has placed on the job that you perform. A functional role is the role you fulfill based on what you actually (functionally) do within the organization. Your outbound messaging should always cater to the functional role, not the title.

Examples of roles that don’t match to titles:

Logic for Role Categorization: Instead of categorizing them as “Marketing Leadership”, I chose “Marketing Practitioner” because this person is a team of 1, with no direct reports. My messaging and content is different for leadership roles than it is for marketers in the trenches turning wrenches. Very different value proposition. So, if I send this practitioner a bunch of content on managing a team, it would be a miss because that content isn’t relevant to this individual, even though she has a manager title.

Logic for Role Categorization: Same as the marketing scenario from above. This person is an individual contributor, but carries “Director” in the title. In most automated systems, this person would get the incorrect correspondence because the system might think this person is a sales leader.

Logic for Role Categorization: Maybe you’re selling a service of some sort and the project team on the prospect side has an architect that also plays the role of project manager. For the purpose of this one transaction, I’d categorize this person as a project manager because that’s their focus and job in this specific scenario.

The only time there’s really conflict is if someone is playing multiple functional roles in your deal. Like with the architect/project manager scenario above, what happens if there needs to be an architect and a project manager being filled by the same person? Spend more time with this stakeholder. Ensure they’re getting educated for all of their relevant roles.

How do I begin developing and defining my functional roles?

Hopefully, as the sales rep, you’re not starting from scratch and have either sales enablement or product marketing helping to define what roles you sell to and their corresponding pain points. If not, or if that collateral isn’t quite hitting the spot, it’s time for some deep thinking about your solution and the people that use it. Before you start digging too deep on your own, maybe speak with a top seller or customer success manager (even better) within your organization, share the first part of this article with them, then ask what functional roles your solution impacts and if there are any discrepancies between titles and roles.

If that’s unavailable, spend some time with customers you’ve built relationships with. They’ll always be brutally honest with you. Ask questions like:

In case it helps, here’s how we categorize our functional roles at Forecastable, each of whom derive very separate benefits from our platform and therefore receive different messaging from us throughout our engagement:

Now let’s get into the actual stakeholder research

LinkedIn provides some powerful searching capabilities in Sales Navigator if you know how to use them to the max (another post for another time). But, in general, simply filter down to the contacts you find interesting and open all of those stakeholders up in new tabs by holding down the CTRL (PC) or CMD (Mac) key while clicking their name. Once you’ve got that batch of stakeholders opened up in new tabs, then you can begin doing your individual research and note taking. 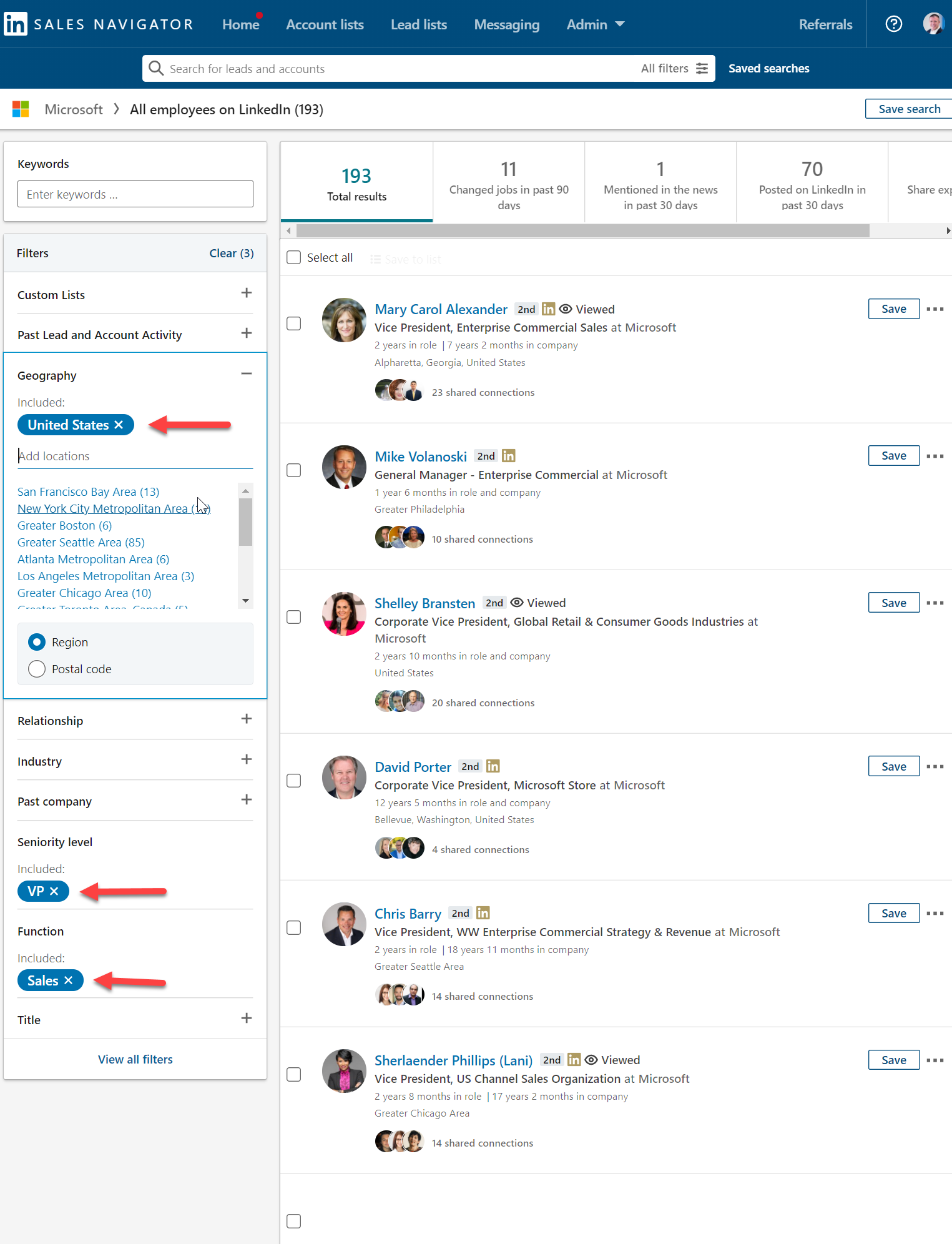 Once you’ve got all of your roles down, the real stakeholder research begins and it all starts with LinkedIn Sales Navigator. I tend to start logging people from the CEO down to the lowest level of stakeholders I feel will be involved in the deal, in that order. Whether you’re using our free spreadsheet or using Forecastable, taking notes along the way will help you from having to re-research that stakeholder down the road. Be sure to include name, title, and location in your list. 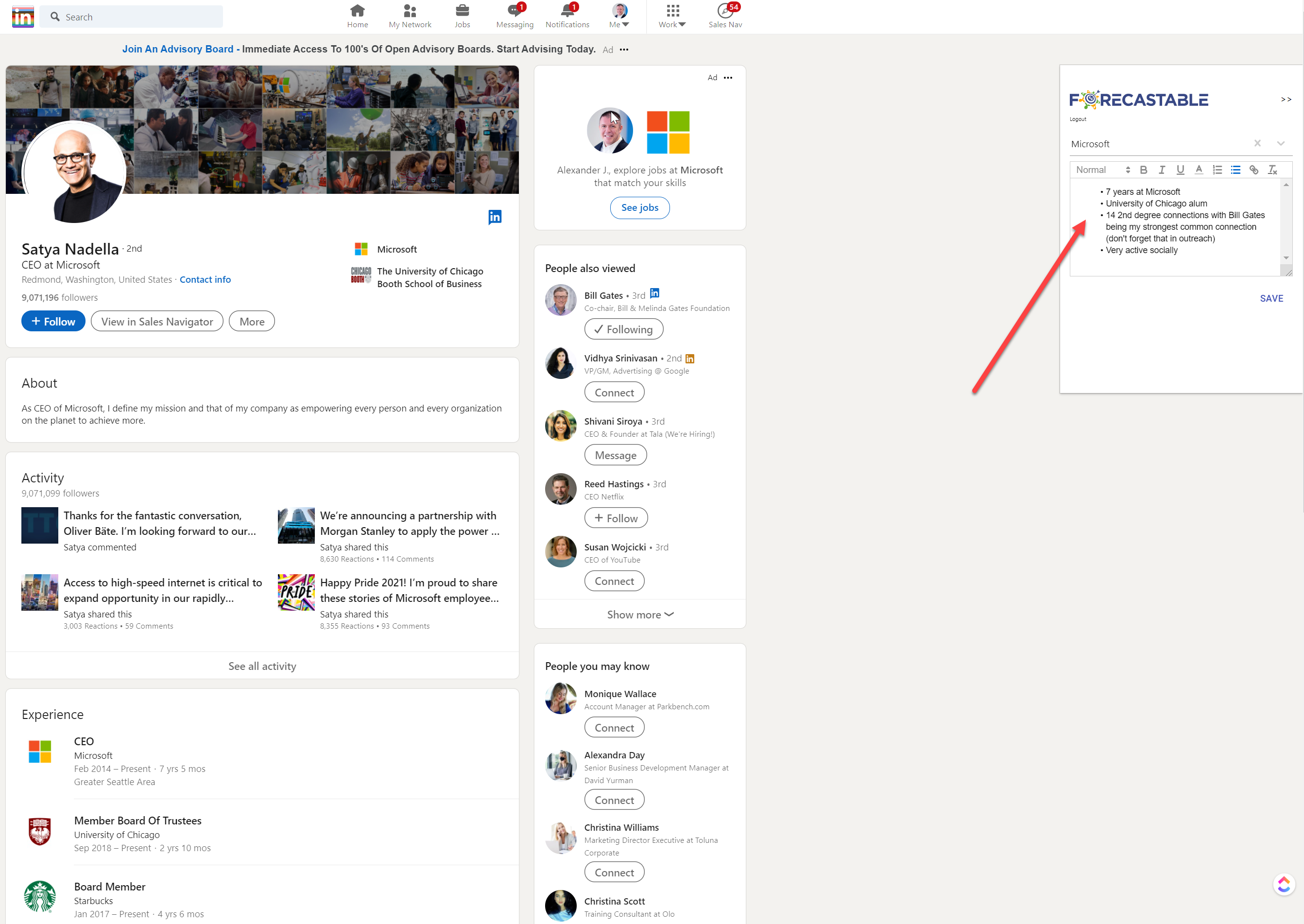 Again, whether you’re using Forecastable or our free Google sheet, you should be assigning functional role values to each stakeholder. If there’s no clear role for a stakeholder, don’t just fill one in. Stop and ask yourself why this is. Should there be another role added or is this a one-off situation? 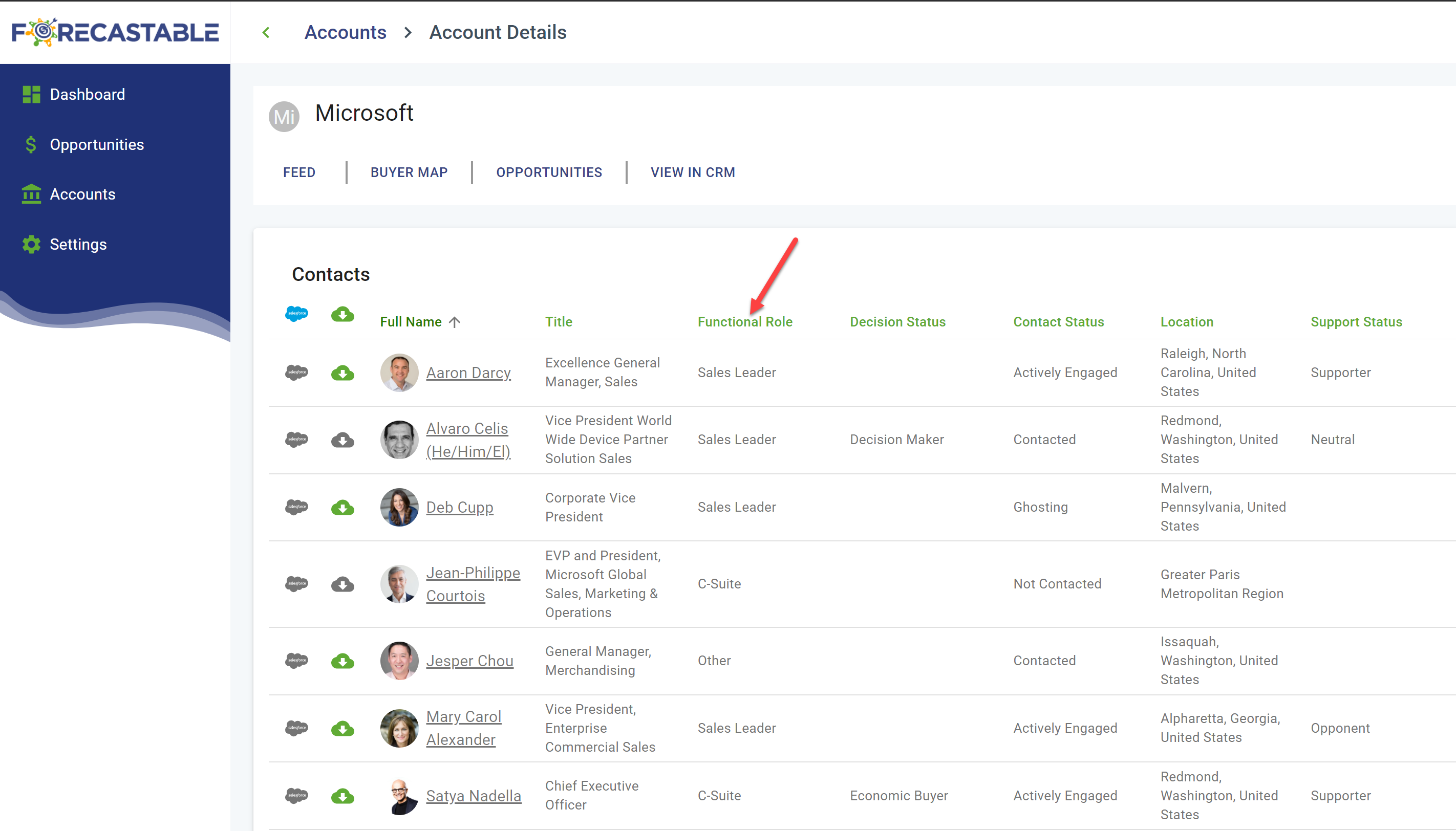 If you’re using Forecastable and are running ZoomInfo, you can enrich this entire list with email and direct dial information with a single click. If you’re not, and you’re using our spreadsheet, you can either guess the email addresses based on email format or you can hook our sheet up to Hunter.io and at least get accurate email addresses for these folks.

Whether you use Outreach.io, Salesloft, or one of the many other sales engagement platforms out there, you’ve now got a fully-prepped list ready to rock and roll. So, upload your list and get to work using all of those personalized data points you gathered during your research phase.

In summary, while we’ve detailed out a tried and true method for stakeholder research and getting these folks into outbound sequences or cadences, at the end of the day try to live a day in the life of your buyers. Get to know them. Understand each functional role. Know their pains inside and out and put yourself in their shoes. Operating from this perspective, and ruthlessly trying to solve their problems will most certainly lead you, and them, to success.